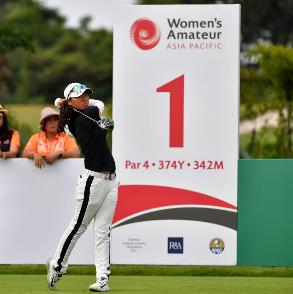 
Having earned herself the title of Asian champion by winning the Asian Games individual gold medal, Philippine’s Yuka Saso will be looking to extend her geographical domination when she tees it up at this year’s Women’s Amateur Asia-Pacific (WAAP) championship.

The forever smiling 17-year-old from Manila came close to winning the inaugural WAAP at Singapore’s Sentosa Golf Club last year when she forced her way into a four-way play-off, but a bogey on the second extra hole denied her victory as Thailand’s Atthaya Thitikul prevailed.

Saso made up for that heartbreak later in the year in Jakarta where she won the individual gold medal in golf at the 18th Asian Games and also combined with teammates Bianca Pagdanganan and Lois Kaye Go to win the team gold – both a first for Philippines golf.

World number 72 Pagdanganan, who secured the individual bronze medal in the quadrennial games, will also be a part of the Philippines’ contingent in Japan, along with Abegail Arevalo, Clare Legaspi, Mikhaela Denise Fortuna and Francesca Bernice Olivares Llas.

Saso has been in terrific form of late, having finished outside the top-four only once in her last seven starts since November 2018, and heads to the second edition of the WAAP as the third highest-ranked player in the field at world number 30. The championship will be played at The Royal Golf Club in Hokota, Ibaraki Prefecture, Japan, from April 25-28.

Even though expectations will be high for Saso, given her performance last year and current form, she intends to just go out and enjoy herself at the WAAP.

“I am very proud of what we did at the Asian Games, especially with my teammate Bianca and Lois. We really had fun out there. The Asian Games taught me so many things. It was a very nice experience,” said Saso, who has committed to the Georgia Bulldogs and plans to pursue a college golf career in the United States before turning professional eventually.

“Even though I did not win, last year’s WAAP was great fun too, and I felt that I learned a lot. I don’t really think about getting so close (to the title), and neither is the tied second place finish any extra motivation for me to do better this year. There were plenty of positives to take from that result.

“I am now really looking forward to playing the WAAP again in Japan. We all know that it is such a prestigious championship. As I said, I just want to enjoy every moment of being there.”

It’s not just her form – that stretch of six top-fours in seven starts includes successfully defending her Philippine Ladies Open title last month – but also the fact that Saso has played a number of events on the Japan LPGA Tour and done consistently well that makes her one of the favourites, a tag she quickly downplayed.

“I’m not so sure if I am playing my best golf at the moment but I’m happy with the way I’m playing right now. Of course, there's still a lot of things that I need to work on but what matters to me is I’m having fun,” said Saso, who made four cuts in the five professional events she played in 2018.

“I am not sure if playing with professional tournaments in Japan will help with my preparations for the WAAP. But I’m pretty certain the Royal Golf Club will be a big step for me and I will have lots of questions regarding the golf course when I am there.”

Women’s golf is enjoying a boom in the Philippines. As well as their unprecedented success at the Asian Games, four Filipino ladies are now ranked inside the top-100 of the WAGR.

Saso credited the National Golf Association for the success and said: “I think it’s because the players are now working on the right things and the support that we get is getting better.

“I don’t really want to speak for the others but I'm sure everyone, including me, are very excited and looking forward to the WAAP.”

The field at the Royal Golf Club comprises 15 players ranked inside the top 100 of the WAGR. The largest contingent is eight players from host nation Japan, while there will be players representing nations such as Bangladesh, Guam, Vietnam, and Cook Islands – countries where the women’s game is still in its infancy.

The champion will earn a spot in two of the five women’s majors – the AIG Women’s British Open and the Evian Championship. She will also receive an invite to the 2020 Augusta National Women’s Amateur.

The Women’s Amateur Asia-Pacific championship has been developed by The R&A and Asia-Pacific Golf Confederation (APGC) to unearth emerging talent and provide a pathway for Asia’s elite women amateurs to emerge on the international stage.

The R&A launched the Women in Golf Charter last year and is committed to increasing the participation of women in the sport. The WAAP is one of several key championships conducted by the governing body and a significant initiative along with the APGC to drive the popularity of women’s golf in the region.