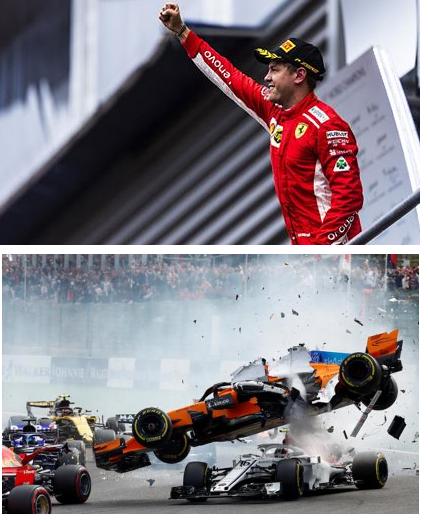 A masterful Sebastian Vettel - Scudería FERRARI victory and a racing point proved for Force India, but chaos at the start of the Belgium Grand Prix led to one of the most spectacular crashes F1 has seen in some time, with five cars eventually ruled out as a result of damage shipped in the first-corner collision.

However, as F1’s Managing Director, Motorsport, Ross explains, first impressions of the collision prove the worth of the sport’s relentless pursuit of safety.

Sebastian Vettel scored an emphatic win at the Belgian Grand Prix.
On Saturday, the rain deprived Ferrari of taking pole, something that had seemed within the team’s grasp, but on Sunday Sebastian had no qualms in attacking Lewis Hamilton right from the start, overtaking the Briton on the Kemmel straight and making the most of the power and aero efficiency of his car.
From then on, Vettel managed the situation, with two key moments helping him to victory. The first was the restart after the Safety Car period, when he managed to fend off Hamilton’s advances.
The second came in the single round of pit stops, when Mercedes unsuccessfully attempted an undercut. Ferrari reacted immediately and executed Vettel’s own pit stop perfectly. The German pushed hard on his in-lap, his mechanics did a great job, and Sebastian emerged in the lead once more.

The second half of the race was quieter and, in fact, his lead at the end was over 10 seconds. Vettel’s 52nd career win is significant, coming on the back of two Hamilton wins, even though on those occasions Ferrari probably had the stronger package:
In this Belgian GP Spa, apart from the outcome of qualifying, the technical hierarchy was respected and Vettel was therefore able to close the gap to the Englishman to 17 points.

And now comes Monza, where Ferrari will be able to count on the support of its incredible fans. That won’t add any horsepower, but it will definitely provide the motivation to see the team giving 110%, something I’ve experienced first hand.


FORCE INDIA:
What an incredible weekend for Force India. Reborn as Racing Point Force India, on Saturday it got both its cars onto the second row of the grid and on Sunday brought both cars home in the points, in fifth and sixth places.
It was very important that this story had a positive outcome, thanks to the efforts of all those involved, including the FIA and the other nine teams entered in the championship. It was significant for the good of the sport, for its credibility inwardly and in the eyes of the outside world, and above all for the hundreds of the team’s employees and their families who were worried about job security.
Today, the team is solid, in the hands of a group of investors who believe in the sport’s long term potential, and who are really enthusiastic about motor racing. I know a great many of the people who work for the Silverstone-based team and I know how much effort they have expended during the past difficult months. They are real racers, with a deep passion for racing, and I am particularly happy that this new chapter has begun so positively.
What happened to them over the weekend is a remarkable story, the sort that seems to have been written by an invisible hand. I’m sure they will now be able to truly enjoy this moment, safe in the knowledge their future is no longer hanging by a thread.

FERNANDO ALONSO, accident - SAFETY - 'the halo' -
Incident immediately after the start of the Belgian Grand Prix, Fernando Alonso’s McLaren fly through the air and hitting the top of Charles Leclerc’s Sauber...

The fact that both drivers climbed out their wrecked cars unharmed is testament to the extraordinary levels of safety in Formula 1. The fight to ensure the security of drivers, marshals and spectators is one that must never end because there is always room for improvement, and the first impressions from yesterday’s crash confirms that.
The Halo, the head protection device that came in for so much criticism when it was introduced this year, in all likelihood prevented Leclerc’s helmet from being hit by Alonso’s car. The marks on the Sauber’s Halo speak volumes in this regard, although I agree with FIA Technical Director Charlie Whiting’s affirmation that we must wait until the crash has been properly analysed before reaching any definite conclusions.
What is a fact is that many of the drivers, those involved and others who witnessed it say the Halo definitely improves safety and you can’t put a price on that !