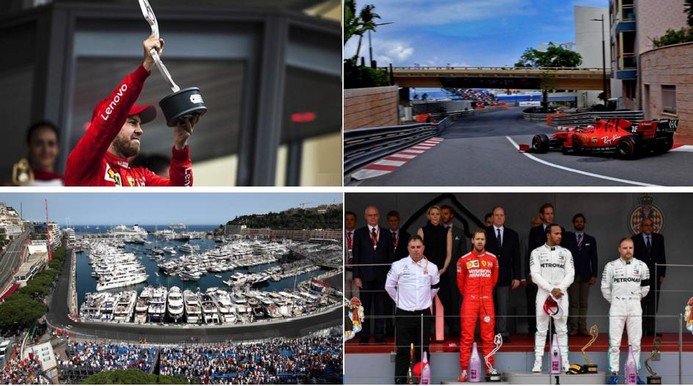 * Lewis took his 77th career victory  - his fourth of the 2019 season and his third at the Monaco Grand Prix , Valtteri finished the race in P3, his first-ever podium finish in Monte Carlo
* Lewis (137 points) leads the Drivers' Championship by 17 points from Valtteri (120 points)
* Mercedes-AMG Petronas Motorsport (257 points) lead Ferrari (139 points) by 118 points in the Constructors' Championship
* Ron Meadows, Sporting Director, accepted the Constructors' trophy on behalf of the team

Toto Wolff
That result means a lot. It was a World Champions' drive for a World Champion that isn't among us anymore. It couldn't have been a more dramatic race, so I am relieved it is over. Lewis did an incredible job out there, it was a really hard-fought race with Max. We know the tyre choice, in hindsight, was wrong with Lewis and we should've taken the Hard tyre at his stop. But, these things happen and at the time we thought the Medium was the right call. It was the driver who made the difference and managed the race. Valtteri had a tougher time, losing ground with the pit stops and the clash with Verstappen in the pit lane, but he did a great job and will be determined to fight back.
This one was a really hard-fought victory and now we have a couple of days that are going to be difficult with Niki Lauda's funeral in Vienna before we set sail for Canada.

Lewis Hamilton
Today was one of the hardest races of my career, it was so intense.
With 20 laps left I thought there was no way I was going to make it to the end. I thought I was going to crash, I was battling so much with the car. There was absolutely nothing left in the tyres and it was so tough to keep the car on the track.
- I thought to myself, 'what would Niki do'. -
I was trying my hardest - giving everything I had. I just tried to stay focused and make no mistakes. I know he was watching me today, but with Niki by my side we managed to do it. I wore his helmet colours today and I didn't want to let him down. He was close to my heart, I really wanted to deliver for him this weekend and I was determined not to crack under the pressure. Today belongs to Niki.

Valtteri Bottas
My race was decided in the pits. We did a double-stacked pit stop under the Safety Car, Lewis first, then me. Vettel and Verstappen came in as well and when I left the pits, Max was released at the same time and was side-by-side with me. We touched, I hit the wall because there's no space to go and I got a right-front puncture. So I had to do another pit stop the following lap. At that point, I thought I'd be at the end of the field, but I only lost a couple of places, so I guess I was unlucky but lucky at the same time. It's always disappointing if you finish the race lower than you qualified; however, my pace was really good all weekend long and I still scored valuable points for me and the team. One of my first thoughts this morning was that I wanted to drive well for Niki, I wanted to win for him. Ultimately, I didn't, but Lewis did, so I'm sure Niki would be proud right now.


Andrew Shovlin
We wanted to win this race for Niki but winning in Monaco is always much easier said than done. There was a bit of a risk of rain early in the race and while it didn't really turn into much, it meant that we were pushing a bit harder than we'd planned to build a bit of a gap to the midfield. The Safety Car was earlier than we would have liked and with hindsight, we should have fitted the Hard tyre, but we were concerned about the warm-up on the restart, which was why we took the medium. That obviously made life difficult for Lewis and we'll review our decision making and the information that we had at the time. We're grateful that Lewis was able to manage it so well to the end as he really had to work for the victory today. Valtteri's race was also compromised at the Safety Car. We felt the release from Red Bull was ok, but Max had room on the left to give Valtteri more space rather than putting him into the wall. That broke the front right wheel rim and caused a puncture, so we had to pit for a new set. From there his opportunities were rather limited. The car had good pace, but you simply can't pass here and Valtteri had a frustrating race stuck behind Vettel. It was some consolation that Valtteri was able to get back on the podium after Max had the time penalty applied. Well done to Lewis, we made life more difficult than we needed to for him today, but our thoughts are now with Niki and his family. He has been such a big part of this team over the last few years, we have benefited so much from his wisdom and straight talking, and he is simply someone who cannot ever be replaced. All he would have asked of us is to give it 100% and race hard and that's what we will do.

MAX VERSTAPPEN, Finish Position: 4th*, Start Position: 3rd
“I gave it my all today and I had a fun race. I think we were very competitive and I enjoyed putting the pressure on and trying to go for the win. You know when you’re up against Lewis it’s going to be very hard but I kept pushing him and I tried to force him into a mistake. I made him use his tyres a bit more than he wanted which meant I could attack. At one point I could see his tyres really dropping off and there were a few corners on the track where he was really slow which meant I could line up a move, but we just couldn’t get close enough. With a few laps to go, I thought I’m going to try it now and see what happens. We touched but luckily nothing came of it. The penalty from the pit stop is unfortunate, but I don’t think the Team did anything wrong and it is impossible to see in that tight pit lane. When you look at our pace we were very strong and that’s the most important thing. Of course, I would have liked to be on the podium but I enjoyed the race and you win some, you lose some. It’s easy to say with a few more laps I would have got him but I tried my very best and that was all I could do. The Team did a mega job all weekend and we tried everything we could to get that win today.”
*Finished 2nd on the road with a 5 second penalty applied as per Stewards’ decisions

PIERRE GASLY, Finish Position: 5th, Start Position: 8th
“It was a really positive day and we can be very pleased with fifth position after starting eighth in Monaco which is a difficult track to recover positions on. We had a very good strategy and a really great car to race. I enjoyed driving such a fast car on a track like this and to be able to push so hard at the end and put in some very quick laps and to finish within ten seconds of the leader after starting eighth. I’m really happy and now we need to keep working so we can deliver similar performances in the coming weekends.”

CHRISTIAN HORNER, Team Principal:
“Max drove the wheels off the car today. He got away in grid position and had a look at passing Bottas into turn one but wasn’t quite far enough alongside. The mechanics did a great job with the pit stop and Max left the box before Bottas which, as per the rules, is fine. Unfortunately, it all got a bit too tight resulting in the Mercedes making contact with the barrier and the stewards issuing Max a five second penalty. Max drove like a lion for the rest of the race and tried everything he could to pass Lewis. We had a better tyre strategy and there was only really one lap where he got close to making a move into the chicane. Finishing second on the road, but with the top four so close, he was denied a podium. Finishing fourth is tough for Max today after a drive like that but as always, he didn’t give up until the checkered flag. Pierre really made a great recovery having got the penalty yesterday and starting in P8. He kept his head, was quick when he had clear track and managed to move up the order. With the benefit of the second pit stop, he smashed the fastest lap for that extra point which is important for the Team and was able to progress up to P5.
A great job by him and the Team and also congratulations to Honda for having four Honda powered cars in the top eight.”