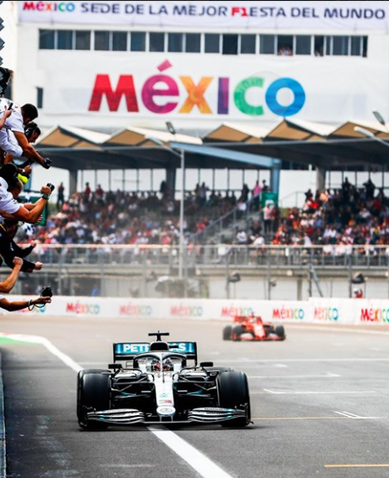 Lewis Hamilton was the undoubted star of the F1ESTA!  That was the FORMULA GRAN PREMIO DE MEXICO 2019 and he was even joined on the fantastic podium at the Foro Sol stadium section by his number 44 Mercedes AMG Petronas Motorsport car.

Hamilton emerged victorious at the end of the race which, on Saturday night, he had
seemed very unlikely to win and after the first lap, a miracle looked to be required to secure victory.
Both Ferraris were on the front row and then he went off at turn 1 after the start while duelling with Sebastian Vettel. Come the next corner he and Verstappen touched, so the situation seemed somewhat compromised.
But the five times world champion produced yet another bravura performance to take his tenth win of the season, his 83 rd in total.

Despite no longer being the quickest over a flying lap, given that a Mercedes has not been on pole since Germany, the champions elect proved to be strongest in the race, both in terms of pure performance and in how they handled the strategy.
In fact, that was the key to turning things around, linked to Hamilton’s usual masterful ability to manage the tyres. Mercedes immediately went for a one stop strategy, which given the data from Saturday and the long runs on Friday, did not seem to be the best. Furthermore, the Silver Arrows strategists split their options, bringing Hamilton in early on lap 23, while Bottas stayed out until lap 36. The Finn pretty much marked Vettel who was leading at that point. After the run of pit stops, which ended with Leclerc’s second stop on lap 43, having made his first on lap 15, Hamilton found himself in the lead, but facing the prospect of going all the way to the end of the 71 lap race on a set of Hards which had already done around 20 more laps than those of his pursuers.

Thus began a short sprint race between the two Mercedes and two Ferraris, all on Hard tyres, with Hamilton the hare  to  Vettel’s  hound,  the  German  himself  being  hunted  down  by  Bottas  who  at  this  point  looked  capable  of catching the both of them.

Behind this trio, running within 6 seconds of one another, came Leclerc who had started
favourite and even if the two stop strategy was not looking that good, he still had hopes of being in the game, making the most of being on fresher tyres.

In fact, there was no change in the order, even if there were moments when it seemed that Vettel and Bottas might have deprived Hamilton of the win. However, the Englishman never let them get that close, proving that he had a bit in hand every time that Vettel got within less than two seconds of him. Bottas was never able to attack the Ferrari man, even on the couple of occasions when he could use DRS. Leclerc did manage to close on the Finn, despite a slow second pit stop because of a problem fitting the right rear wheel. But his hope evaporated with a mistake at turn 4 with 12 laps remaining.
From then on, the Monegasque didn’t seem able to keep up and had to settle for fourth, definitely below his expectations going into the race. Scant consolation came in the form of a point for setting the race fastest lap.

The man leaving Mexico with the most regrets is undoubtedly Max Verstappen.
Saturday, the Aston Martin Red Bull Racing driver was fastest in qualifying, but was then dropped three places on the grid for not respecting the yellow flag waved when on the final lap.
A collision with Hamilton on the opening lap and a puncture following another incident with Bottas as he tried to pass him on lap 4 meant he had to pit and take on a set of Hards, which he proceeded to drive on for 66 laps all the way to the chequered flag going from last to sixth.

He did it without any outside help such as safety cars but finishing over a minute off the winner must leave him reflecting on the missed opportunity of scoring a third win of the year. He finished behind team-mate Alexander Albon who starred in the opening laps behind the two Ferraris, but then suffered as did Leclerc by opting for a two stop strategy.

Daniel Ricciardo also did a great tyre management job, starting from 13 th
running a very long 50 lap stint on Hards so that he was chasing local hero Sergio Perez as they fought to be the “best of the rest.” Once he took on the Mediums, Ricciardo closed up to the Mexican Racing Point driver but could not get by. He got his front wheels ahead
at  one  point  but  his  attack  into  turn  1  was  decidedly  optimistic  and  he  ended  up  going  off  track,  but  with  no consequence.

Pierre Gasly and Nico Hulkenberg completed the top ten although ninth across the line was Daniil Kvyat. Torro Rosso’s Russian had barged his way past the Renault at the final corner but Hulkenberg was sent crashing into the barriers and Kvyat dropped down to 11
th with a 10 second penalty.

Four teams failed to score points. That’s hardly a novelty for Williams, who have struggled all year and indeed Haas and Alfa Romeo have also struggled since the summer break, whereas for McLaren, pretty much the fourth team in the pecking order, this was unexpected. Carlos Sainz was down in 13 th  while Lando Norris didn’t see the
chequered flag, after the team sent him off after a pit stop with one wheel not properly secured, which dropped him to the back of the field so that a short while later the team decided to retire him.

Lewis Hamilton has not yet got his hands on his sixth title, but he’s getting even closer to this amazing achievement.
He leads his team-mate by 74 points and there are only 78 up for grabs from the remaining three races. The fight for  third  is  still  on,  with  Leclerc  now  only  6  points  ahead  of  Vettel.
Vettel  has  now  dropped  to  16  behind  the Monegasque. The fight for fifth in the Constructors’ is still on with Renault on 73, nine points ahead of Toro Rosso and Racing point.

There’s no time to pause for breath because after this amazing Mexican fiesta, with 138,435 fans turning up today and 345,694 over the weekend, Formula 1 cars are back on track as from Friday in Austin where the Circuit of the Americas hosts the FORMULA 1 EMIRATES UNITED STATES GRAND PRIX 2019 on 3 November.

We cross the border for the final leg of the last back-to-back of the season, as we go Stateside for Round 19 of the FIA Formula One World Championship.
Austin’s popular Circuit of the Americas is a favourite amongst drivers and fans, not least due to its lively off-track atmosphere.

• 10 different venues have hosted Formula One races in the United States, the most of any country.

• The Circuit of the Americas has the joint-third most corners, with the Baku City Circuit, of any track on the calendar. There are 20 turns in total, split between eleven left-handers and nine right-handers.

• The high number of corners and changes in speed means that it is also one of the busiest laps on the calendar for gear changes, with around 52 per lap.

• The high-speed first sequence of corners at Austin see the drivers taking the first six corners at an average speed of over 260kph and makes this circuit one of the most sensitive to downforce.

• Circuit of the Americas is one of only five tracks on the 2019 calendar that run fully anti-clockwise (three of which make up the last rounds of the season).

• Many of the corners at the Circuit of the Americas were inspired by iconic turns from European tracks. These include the Turn 3-6 complex (similar to Silverstone's Maggots and Becketts), Turns 12-15 (Hockenheim's stadium section) and Turns 16-18 (inspired by Istanbul's Turn 8).

• Drivers experience 5.0G through Turn 6 at CotA, which is the joint-second highest of the season alongside Turn 9 (Copse) at Silverstone.

• The braking zone for T12 sees the drivers experience over 5.8G under braking and makes it one of the biggest of the season. This means that a driver weighing 70kg experiences forces of over 400kg under breaking.

• Turn 1 at Austin is the biggest single corner elevation change of the season, with the drivers climbing over 30m in little over 200m of track.

• Austin is one of the bumpiest circuits on the F1 calendar with several sections on the straight between T11-12 requiring surface grading to reduce the severity of the bumps.

• With 44 overtakes in 2017 and 31 in 2018, the Circuit of the Americas is one of the tracks most likely to see positions in the race decided by on-track overtakes.

'After we secured the Constructors' trophy in Japan, we said that we wanted to end this season in style and the race in Mexico was the first proof of that. It underlined how hungry this team still is - everyone keeps on pushing for the best possible result. It was the 100th victory for Mercedes-Benz in the F1 world championship - a great milestone in our motorsport tradition and an achievement that is testament to the skill and dedication of the many people who have contributed to our heritage.

The next race at the Circuit of the Americas is only a few days away and we're all looking forward to another fight on track. We have a decent track record in Austin; however, we had a difficult weekend in Texas last year as we struggled with tyre management. The W10 treats its tyres more gently than our 2018 car, so this should be less of an issue this year.

CotA has produced great racing with lots of overtaking, so we hope for another spectacular Sunday in Austin. The crowd is usually very enthusiastic and I'm sure we'll meet a lot of new fans thanks to the success of the F1 Netflix series in the US. It's great to see the growing TV audience numbers in the American market and we'll fight hard to make sure that this year's race will contribute to the increasing interest in our sport. '