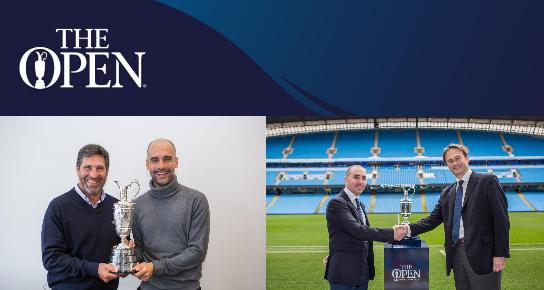 The Open has teamed up with Manchester City Football Club ahead of the 146th staging of the Championship at Royal Birkdale this July.

The agreement will see The Open and the Club deliver exclusive content to both golf and football fans in the build-up to the much-anticipated Championship.

He was then given a guided tour of the state-of-the-art facility by good friend and Manchester City Manager, Pep Guardiola.

The pair posed with the famous Claret Jug trophy before delving behind-the-scenes of the first team training complex, including the indoor pitch, player gym and dressing rooms.

To complete the visit, Olazábal demonstrated his prowess on a golf simulator, alongside Pep who is an avid golf fan.

Olazábal said, “The Open is huge, especially for us. Obviously it is huge for the world of golf but for us Europeans it is the only major played on this side of the Atlantic so for us it is everything. It has a lot of history behind it and the rotation of the courses make it special but what makes it really special is the knowledge of the crowds as they are always fantastic.”

Olazábal also entertained fans at the Etihad Stadium before the Liverpool game and at half-time with a series of skills challenges, as City fans pitted their wits against the former Masters winner.

The partnership will also provide fans the chance to get up close to the Claret Jug as it visits the Manchester City store and Hospitality Golf Day.

Speaking at the official launch, Johnnie Cole-Hamilton, Executive Director - Championships at The R&A, organisers of The Open, said, “Manchester City is one of the biggest clubs in the world and The Open is one of the world’s greatest sporting events. We are looking forward to working with Manchester City to help promote the Championship ahead of its return to the historic links at Royal Birkdale for the tenth time.”

Chief Operating Officer for Manchester City, Omar Berrada said, “The Open is a cherished sporting institution, steeped in history, with an ever-growing global fan base. As a proud North West club, we’re delighted The R&A is hosting the next Championship in the region and look forward to collaborating on innovative and engaging content for both sets of fans.”


Fotos: 'The Open', R&A communications, all rights reserved.
- José Maria Olazábal and Pep Guardiola with the Claret Jug.
- Omar Berrada of Manchester City and Johnnie Cole-Hamilton of The R&A launch the partnership