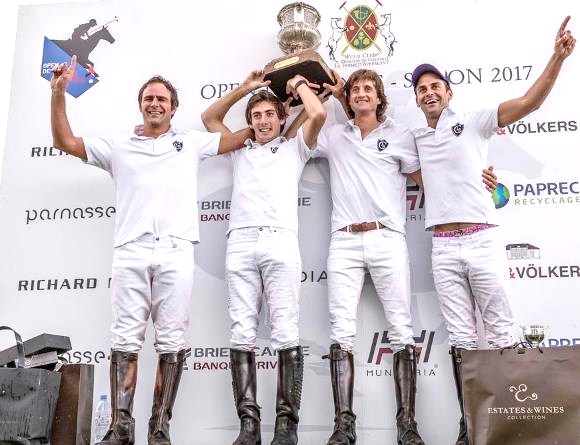 It is what can be called great vintage!
This 17th edition of the Paprec French Open 2017 was definitely the most beautiful one.

From beginning to end: from the qualifying matches to the final. A final is not always a good one: the players are tense, scared of doing the wrong thing, the game is more often focused on defense.
This time was completely different. By winning this 2017 French Open in their first participation, the Argentinian team  Cibao La Pampa  obtains the Triple French Crown further to its victories in the Gold and Silver Cup in Deauville.
Just exceptional!

The Argentinian businessman Juan Pepa, living in Madrid, was the happiest man on Earth this Sunday afternoon in Chantilly.
Although a usually quiet man, he did not hesitate to cry his joy, along with a few rude words (of joy) that is natural among Argentinians. Once he calmed down, he first paid tribute to his mare, La Boxaderia, crowned best horse in the final: « I am so happy for this mare born in Morocco in the home of Patrick Guerrand-Hermès and this prize honours this breeding that produces so many great polo horses. It is the best thing in this story. All my horses come from Patrick’s breeding. » Patrick Guerrand-Hermès is by the way the founder of the Domaine de Chantilly Polo Club and created this La Palmeraie breeding in Morocco.

Naturally the victory that concluded this amazing season, inspired the winner:  «I always dreamt of winning this title, now that it is done, we can come back and lose, it will not be serious.
Beyond victory, it’s the way it all happened: overall the tournament took place in great spirit, it was a genuine competition among gentlemen… » Indeed despite the intensity that settled in the first few seconds of the game, overall the match took place with great respect. There was no room for a round of observation, everybody got into the heart of the matter right away.
The rhythm was upbeat right until the last bell sound where the two referees sent away to Palenque on a score of 10 everywhere but requested players to return for an additional time period as the title was going to be played on a golden goal… quickly scored by the n°2 from Cibao La Pampa, Carlos Ulloa, sparking the tremendous bliss previously mentioned!
The joy was all the more intense since this final was far from being decisive.
It was marked namely by strokes of genius from Rufino Bensadon, 15 years old - 5 goals including a staggering one where after having grabbed the ball from an opponent on the attack, he ran the field on a fast half turn from top to bottom leaving everybody behind and just hit the small plastic ball between the poles of the opponents. It was a crucial moment, where he gave the lead to his team In The Wings within just two minutes from the end. Unfortunately Ciabao La Pampa took a penalty on the spot, in front of the goals, within a few seconds from the end, that  Manu Elizalde transformed to equalize and bring his team to victory and toward this first Triple French Crown  that shall not be forgotten!

It was a wonderful day for polo, the club welcomed hundreds of people for this classical encounter and three finals won by Maryland (Trophy of the Capitaines des Jeux, of… half-goals), the Académie de Polo (Ladies’ French Open Engels & Völkers) and Jivaro (Castel Trophy).
The Paprec French Open marks the end of the international European season…
However prolongations will be taking place next week with the Championships and the Coupe de France essentially at the Domaine de Chantilly Polo Club.

Boston, US, Inside the New Studio at Jacob's Pillow Dance by Flansburgh Architects ! Home of International Dance Festival