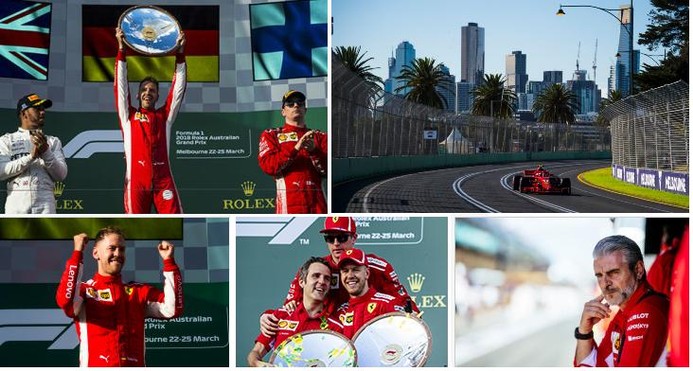 Maurizio Arrivabene, Scudería Ferrari:
' A nice win and a great job from the team, both back in Maranello and here at the track, which led to a fine Sunday for all of us, our drivers and our fans. We have picked up a significant number of points in both the Drivers' and Constructors' championships. There is still a long way to go this season, but today we can be happy, knowing that each and everyone of us has done their very best, according to his role, to achieve this result. Now we will start to prepare for the next race, aware there is plenty to do; work which we will tackle with humility and determination.'

Sebastian Vettel:
'Today has been our day. The Safety Car helped of course, but apart from that, I think we did everything we could do as a team. So when something happened, we were ready to react. We did our job before the race, evaluating different scenarios, and then in the race we had the pace as well. Lewis was under pressure, he was fast, but not as much as he needed. As for me, I need a little bit more of confidence with the car, which is not where we want it to be yet. There is a lot of work to do, but it is great to have both cars on the podium today. Yesterday in qualifying the car came alive, but it was still a little bit tricky, so we have some homework to do. I still need to drive around the issues more than I want to. I know exactly what I want, and we need to work on it. I believe the car has the potential we need.'

Daniel Ricciardo, Aston Martin Red Bull Racing, Finish Position: 4th, start: 8th
“I woke up this morning happy because it’s race day and it’s been too long since we raced so, already before the race I was just happy and smiling. It’s a long wait and in the week leading up to this race, you talk so much about the race and it’s like, let’s just do it. I’m happy with the way I drove today and we had a very fast race car. It’s not often I sit behind someone for most of the race but it’s a tight track and one of the more tricky ones for passing. There were a couple of times I had a look at turn three but Kimi was wise to that and could see what I was planning. Towards the end I applied more pressure on him but he was able to up the pace as well. I think we’re pretty close with Ferrari and our race pace is strong, which I thought would be the case, so we just need to get a few more tenths out of Qualifying and then we should be looking good. Being so close to the podium and getting fastest lap is definitely an encouraging way to start the season. I want to thank all the fans for coming out and supporting us today and now it’s definitely time to go and put my feet up for a couple of days after a busy week!”

Eric Boullier, Racing Director McLaren:
“A good result for us today. We benefitted from every opportunity that was thrown at us – the first being Haas’ double retirement. We really feel for them because we know what this is like; a double DNF is hard to take, but this is racing. “As we said yesterday, we knew we had some potential and further speed to unlock from the car today. We took every chance we could and both drivers drove superbly. We showed good pace, enjoyed some good fights, and we completed two decent pit stops which helped us keep our strategy on track.
“I want to say a huge thank you to the whole team, here and back in Woking, not only because we’re encouraged by the potential our car has shown in the first race of the season, but also reliability-wise we had a trouble-free weekend, which is a relief after the issues we had in winter testing. It’s all thanks to a huge amount of hard work from everyone in the team, who have done a remarkable job since Barcelona. “Now we need to keep pushing, and work on readying the upgrades we have in the pipeline as soon as possible. Our priority is to get closer to our nearest competitors in front, especially those who have the same engine in the back of their car.”

Fernando Alonso (5th):
'“It was a good race today, especially considering where we started (pos. 10 !).
“The last couple of years have been difficult, and I think the winter has been difficult as well. We switched to the Renault engine quite late and the team had to react very quickly to redesign some of the parts at the rear end, and now we’ve come here and both cars have scored points – one in the top five. “We should be proud of that, but I think there’s a lot more to come from McLaren. We didn’t maximise the full potential nor squeeze everything out of the package today. This is only our first race together with Renault, and some updates will come in the next few races. We can start to look ahead a little bit and Red Bull will be the next target.
“As I said before, this race is probably our lowest performance of this season as things are going to get better and better. “Obviously, today we got lucky with the two Haas cars retiring, Carlos’ Sainz problem in turn nine, and then overtaking Max Verstappen under the Safety Car. Let’s say four positions came thanks to some favourable conditions, but we made no mistakes and we capitalised on everything. A perfect job from the team.”