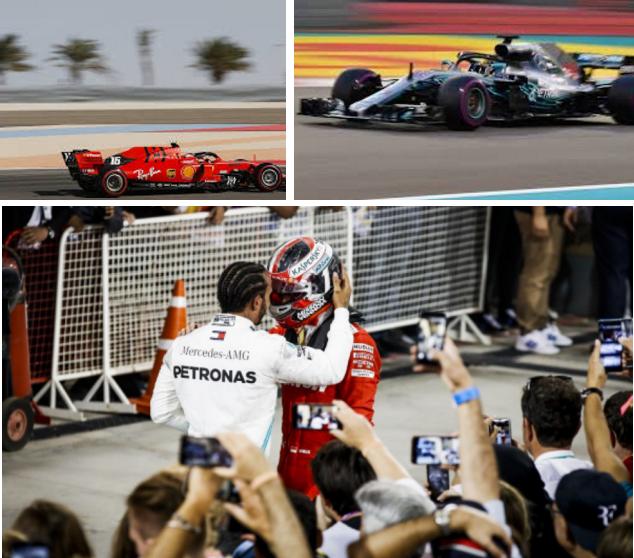 FORMULA 1 GULF AIR BAHRAIN GRAND PRIX 2019, the  Victory for the five-times world champion Lewis Hamilton, Mercedes, came at the end of an exciting race in which Charles Leclerc - Scudería FERRARI played a major role.
The race was  exciting, with plenty of overtaking and drama from the 20 drivers.

It was enjoyed by a crowd of 34,000 spectators who came to the Bahrain International Circuit on Sunday. That is the biggest race day crowd in this event’s 15 year history, as is the overall figure for the weekend of 97,000.

The Mercedes AMG Petronas Motorsport driver secured the win thanks to his team’s superior reliability, given that Leclerc and his Ferrari were the quickest combination today. Starting from pole, the Monegasque driver was beaten off the line by his team-mate Sebastian Vettel and also passed by Valtteri Bottas’ Mercedes on the opening lap.

But Leclerc took back the lead in imperious fashion over the course of the next six laps, before gradually distancing his rivals.
Once he had made his second pit stop without losing the lead, Leclerc appeared to be totally in control of the situation, as he had a comfortable 8.5 second lead over Hamilton on lap 45, the Englishman having relieved Vettel of second place in a spirited duel.

Thanks to the point he got for setting the race fastest lap in Melbourne, Bottas keeps the lead of the championship, while in the Constructors’ classification, Mercedes already has a significant 39 point lead.

The German marque played another role in the final stages of the race, as it provides the Safety Car which for the eighth time ever, the last dating back to China 2015, led the cars across the line to take the chequered flag, because of the previously mentioned simultaneous retirement of the two Renaults of Nico Hulkenberg and Daniel Ricciardo.

The French marque literally saw its hopes of a double points finish go up in smoke. However, it could take some consolation from the fact that it supplied the power unit that allowed Lando Norris to take a great sixth place for McLaren.

Honda could be pleased with its day’s work, because although it failed it match its Melbourne performance of getting a driver on the podium, three of its four cars finished in the points: a fourth place for Max Verstappen, an eighth for Pierre Gasly in the Red Bulls and a ninth place for another rookie, Alexander Albon in the Toro Rosso, which means a Thai driver has scored points for the first time in 65 years, when, back in 1954, Prince Bira finished fourth in the 1954 French Grand Prix. !

Toto Wolff
Charles was very unfortunate today; he was the quickest guy out there and should've won the race. But on the other side that's racing; sometimes you are lucky, sometimes you are unlucky - in my experience it all weighs out in the end. Lewis drove a strong race today. He fought a fight with a weapon that maybe wasn't on his opponents' level, but he managed to stay close to Vettel and win that battle on track, which was one of the key moments for the victory. Valtteri had a tougher day in the office, he was struggling with the tyres on the very abrasive asphalt here in Bahrain. We're walking away with 43 points from this weekend, but it is clear that we were very fortunate today and that it was our reliability, not our pace that won us the race. We are lacking straight line speed which is very important in China. So we need to stick our heads together and analyse why we were struggling with our pace both in qualifying and in the race. It's a very close fight and we need to make sure to bring our A game in order to be competitive in Shanghai.


Lewis Hamilton
It was very tricky out there today and I had to give it everything I had. We were very, very lucky to get this 1-2, Ferrari outperformed us all weekend. Ultimately you want to have a real fight and want to pass someone because you're quicker, so it feels a bit weird and you can't quite believe your luck in these scenarios. I have been in similar situations and I know how it feels, but Charles did a great job all weekend long and has a beautiful, bright future ahead of him. We've only had two races; one where we were rapid and far ahead, one where Ferrari had the upper hand. It's hard to say how the next races are going to pan out, but I anticipate that it will be a tough fight and that it will be a back and forth between the two teams. We need to keep working hard to see where we went wrong this weekend and to see where we can improve the car. But as we saw again today, reliability also plays an important role, so we need to keep working on all areas. We'll take the points we got today and move forward to China.

Valtteri Bottas
This was not an easy race, the car was very difficult to drive and the conditions were very tricky with the gusty winds today which made the car very unpredictable. I had a good start and managed to get to P2, but in the next lap the wind caught me up going into Turn 1, so I lost the position again and ultimately fell back to fourth after a battle with Lewis. After that it was actually a relatively lonely race for me at points, I didn't see anybody; but I think it was probably very exciting from the outside with many unexpected moments. Ferrari were very strong again in the race as they were all weekend. But luck was on our side today, which was a welcome change for me personally after all the bad luck I experienced last year. On the other hand our car was very reliable which ultimately won us the race today. It was a tough race for Charles, but he did a great job all weekend and I'm sure his time will come. We're leaving Bahrain with lots of points but also a lot of work to do for China.


Andrew Shovlin
We're delighted with the 1-2 today but well aware that we didn't have the fastest car this weekend and we've got some work to do to catch Ferrari. We've lacked a bit of rear grip and a bit of straight line speed this weekend and this made qualifying and the race difficult. We've got some developments to try at the test here that should help our speed in the corners; it would be nice in China if we can rely on our pace to get the win rather than good fortune. However, the team did work really well today under a lot of pressure our car has been perfectly reliable here all week which is great to see. It was really unfortunate for Charles today, he has impressed everyone with his speed and composure, so to lose the win through no fault of his own must be tough, but it looks like he won't have to wait long for the next opportunity.

CHRISTIAN HORNER, Team Principal:
“It was a tough race this evening in Bahrain in extremely windy conditions. We seem to have struggled to get the tyres to work at their optimum all weekend and we experienced the same challenge during the race today. Nonetheless, Max made a good recovery at the first corner and raced very hard, but we just didn’t have the pace to go with Mercedes or Ferrari. He was unfortunate to miss out on what would have been an opportunistic podium following Charles Leclerc’s bad luck but hopefully there will be more podiums to come soon. Pierre drove a solid race to score his first points for the Team, finishing eighth, and making good progress through the pack. He displayed his race craft with a couple of bold overtaking moves, which will be good for his confidence, but the Safety Car at the end prevented him from progressing further as he was rapidly closing in on the cars ahead.”

MAX VERSTAPPEN, Finish Position: 4th, Start Position: 5th
“I think we maximised the result today and it was another good point’s score. To finish fourth was not too bad as we struggled with pace and rear grip, especially with the high winds. I was sliding around a lot so it was not easy and I just had to manage it, but I don’t think we could have done a lot differently. I drove to the limit of the car, in Australia it was better but here it was pretty difficult. We were almost on the podium today but it would have been down to luck as we didn’t have the true pace and really deserve it. Anyway, it was more unfortunate for Charles, but at least he’s still on the podium and I’m not too disappointed with fourth. We still have a lot of things to learn about the car so we will go back to the factory, understand what happened here and continue to try and close the gap in China. This just wasn’t our weekend.”

PIERRE GASLY, Finish Position: 8th, Start Position: 13th
“It was quite a difficult race and I’m still not completely comfortable with the car. As soon as I try to push, I struggle a lot with the rear and the traction. For sure, I need to see what I can improve to get the maximum out of the car and work with the engineers to see what we can do to make me feel more confident, because at the moment I feel I cannot really push. I need to make an effort and adapt, because each car is different, and I will work with the team to find a set-up which fits my driving style better. Overall, I think there are also some positives today. After the start the car felt better, I managed to finish inside the points, and now we just need to find the areas we can improve on. We will do the work and I’ll do anything I can to arrive stronger in China.”