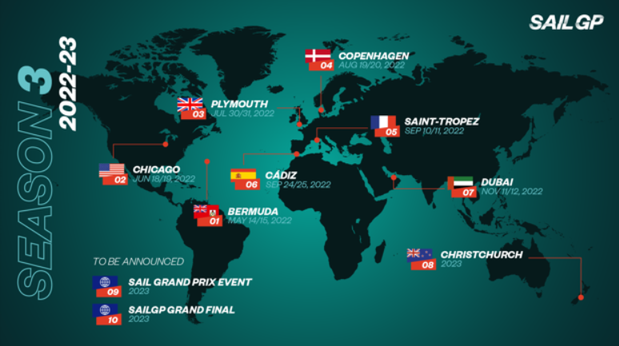 - SailGP is different from other global sailing series as the F50 catamarans fly above the water at speeds approaching 100kph with the athletes onboard just a split-second away from it all going wrong.

- The sailors perform on the edge of chaos and - when the boat is fully-loaded - it generates incredible G-force, hitting around 3Gs as the boat turns at speed which is the same as an astronaut experiences during a rocket launch and enough to deprive an untrained adult brain of oxygen.

- Last season II was full of drama thanks to smashed up boats, capsizes and unidentified floating objects with the United States SailGP Team initially looking to avoid the Bermuda turmoil from last time out when they were completely wiped out by the Japan boat to finish in last place.

- They will also be hoping that there will be no replication of the underwater object that cost them victory in Italy and capsize in front of the Golden Gate Bridge during training for the Grand Final.

- After missing out at the the winner-takes-all Grand Final in San Francisco, the two-time America's Cup winning captain has brought in Flight Controller Hans Henken to try and clinch the coveted title.

- The Flight Controller is crucial to the success of the enterprise as they manipulate the angles and elevations of the right and left hydrofoils which are located between the bow and the stern.

- Success and failure is a thin line in SailGP competition with the risk of sailing the catamaran higher for faster speeds also putting it in more danger of a nosedive that could end their race.

- Outside of the Flight Controller, the Driver, Wing Trimmer and Grinders make up the crew with SailGP wings made from carbon fibre using titanium fittings under a light plastic wrap.

- Racing happens on windward (upwind) and leeward (downwind) courses with the final course to be sailed designated by the race committee no later than five minutes before the fleet's moving start.

- Events take place across two days, with the first day including three fleet races and the second day taking on the other two fleet races and ending with The Final where the cumulative points are awarded.

- In terms of penalties, the umpires use high-tech tracking technology to dish them out with penalised boats having to slow down until they are 20 metres behind the other boats involved in the incident.

- Whoever ends up winning the opening BermudaSGP this weekend, the season still has nine more breathtaking stops around the world with the USA bringing the third season to a close again on May 6-7, 2023.