The 2022 Xtreme Verbier took place on the Bec des Rosses, the same face that has hosted the Xtreme since 1996!
The legendary north face of the Bec represents the origins of the Freeride World Tour and European competitive freeriding.
The Bec des Rosses is a true maze of cliffs and couloirs, making it one of the most exciting and inspiring freeride venues in the world.

Changing of the guard: All four tour winners are first-time FWT Champions.
Outstanding highlight runs in ski and snowboard despite difficult conditions.
Freeride World Tour Champions were crowned today in Verbier, Switzerland at the Xtreme Verbier, the final stop of FWT 2022.

The Xtreme closes a competitive season that will be remembered for breakout performances from Wildcards and rookies, and new world champions in all four categories.
Challenging conditions couldn’t hold back the talented field of riders, who set new performance standards for mixing freeride and freestyle on the steep, gnarly slopes of the Bec Des Rosses venue. 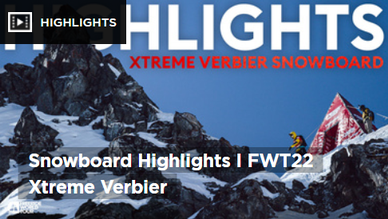 Manuela Mandl (AUT) delivered a masterful run to take a dominant win in Snowboard Women. She was out of contention for the world title but won by a nearly 11-point margin.

Victor De Le Rue (FRA) returned to competition as a Wildcard and won the men’s category with a high-speed run down the steepest section of the venue.

`It feels well earned – we had tough, tough conditions. It has been one of the big aims of my entire career to win at least once in Verbier – and now I did it! So yes, I’m overwhelmingly happy. `  Manuela Mandl

Both of the ski categories were won by Swiss skiers.
22 year-old FWT rookie Sybille Blanjean (SUI) won in Ski Women. Blanjean, a Verbier local, grew up watching the legendary Xtreme, and achieved victory on her first attempt.

`I was so scared this morning that I was crying in my dad’s arms. But I went up and just told myself to have fun. The run was really tough but I managed to hold on. It’s my first podium on the Tour, and for it to be a win at home really means a lot! `  Sybille Blanjean


2022 World Champions     full results
Tiphanie Perrotin (FRA) emerged by the thinnest of margins to become FWT Champion in Snowboard Women.
Erika Vikander (USA) had worn the leader’s golden bib all season, but Perrotin overtook her in the overall ranking by only 500 points.

`We were expecting tough conditions, but these were some of the best we’ve ridden all year! I had a slow start at the first event in Spain, but my results kept improving at each stop.I couldn’t be happier right now.` Blake Moller


Jess Hotter (NZL) became FWT Champion in Women’s Ski.
Though Hedvig Wessel (NOR) chased her all season, Hotter was out of reach in the overall ranking with two event victories and one 2nd place.

Maxime Chabloz (SUI) capped his rookie season on tour not only with the event win, but the title of FWT Champion in Men’s Ski.
Chabloz finishes the season with three event victories, having previously won in Ordino Arcalís and Kicking Horse Golden.

`It’s been a very emotional two or three weeks. After two wins everyone expects you to do really well, so Fieberbrunn was tough with a bad result. So coming here and taking the win with the support of the home crowd is just unbelievable.`  Maxime Chabloz

FWT22 Is Complete
The Xtreme Verbier marks the conclusion of FWT 2022!

The party in Verbier will go late into the night, but the story isn’t quite complete. The last events of the FWQ Finals are this week, which will decide the qualified rookies for next year’s tour.
Full FWT 2023 roster and calendar updates will follow soon. For more emotions this summer, look for the E Bike World Tour to kick off in June 2022.