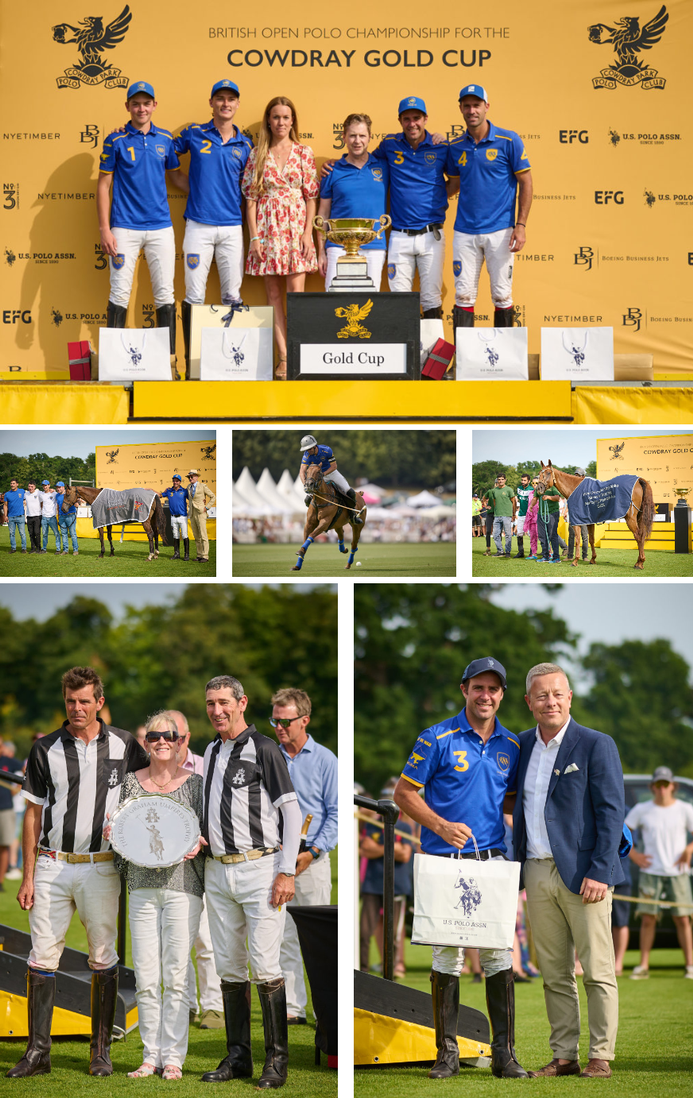 Spectators flocked to the gleaming Lawns grounds to enjoy picnics on the side-lines, VIP hospitality in front line private pagodas, luxury shopping, live music, competitions including the U.S. Polo Assn Longest Shot and the No.3 Gin Best Dressed, and of course the excitement of the match itself which featured world number one, Facundo Pieres, playing for Park Place in their first Gold Cup Final.

A crowd of several thousand settled in around the field to watch the two teams battle into the final chukka in a fast, entertaining match that featured few whistles and fast, open polo. Conceding one-goal on handicap to begin the match, Park Place set the early tone with a dominant first chukka that began with Francisco Elizalde erasing the one-goal deficit on a 30-yard penalty conversion. Picking the ball up on the nearside at midfield, Louis Hine ran the rest of the way for his first goal and quickly followed with his second goal to give Park Place the 4-1 lead.

A long pass from Camilo Castagnola was finished by Matt Perry to get Dubai Polo Team onto the scoreboard and ignite a strong second chukka that included goals from Castagnola and Jeronimo Del Carril to tie the game at 4-all.

The momentum swings continued as Park Place regained control with three consecutive goals to begin the third chukka and were minutes from entering halftime with a significant lead, but Castagnola took the ball out of the air and ran it through the goal to bring Dubai Polo Team within two goals. Adding his second goal, Castagnola inched his team closer by half time, but they remained trailing by one at 7-6 in favour of Park Place as the third chukka ended.

Spectators descended onto the field to tread in the divots and search for the U.S. Polo Assn token which would entitle the lucky finder to £250 worth of clothing. Those in need of some half time sustenance made their way up to the No.3 Gin Bar or the Nyetimber Routemaster bus both providing the perfect spot to enjoy a refreshing cocktail or glass of fizz with stunning views across the field.

The crowd returned to their seats and the second half of the match got underway. Playing one of his best matches of the season, Francisco Elizalde wove through the defence to score two minutes into the fourth chukka. Excelling alongside Facundo Pieres, Elizalde helped change the dynamic of the match as Park Place extended their lead to four due to an organised defensive effort that held Dubai Polo Team off the scoreboard for the entire chukka.
Determined to battle back into contention, Dubai Polo team turned to their own defence to prevent Park Place from scoring, while Camilo Castagnola added a goal and an assist to cut the deficit in half. With the help of his pony, the ball was kicked forward and Castagnola fought off the defenders in front of goal to send the ball through the posts and raise the excitement field-side as Dubai Polo Team pulled within one.

With two and a half minutes remaining, Park Place’s Elizalde stole the ball on the sideboards and sent a pass to goal. On an impressive cut shot, Pieres scored the decisive goal and followed up with a 60-yard penalty conversion in the final seconds to secure the 12-9 victory and the British Open Polo Championship for the Cowdray Gold Cup title.

Cries of joy could be heard from the Park Place team tent as a crowd surrounded the presentation area.

With both the teams at the podium, The Hon Emily Pearson, daughter of Lord Cowdray, presented the glittering Gold Cup trophy to Park Place team captain, Facundo Pieres and patron, Andrey Borodin.

+ The Most Valuable Player award was presented to Francisco Elizalde by Jason Eames-Illingworth of Brand Machine and the Robert Graham Umpires Trophy was awarded to Julian Appleby and Peter Wright by Mrs Betsy Graham.

Celebrations continued in the EFG Lawns Enclosure as polo fans gathered back at the bar and up at The Goalmouth Bar partygoers danced late into the evening as DJ Simon Horn took to the decks.